I am continually amazed at how easily deceived so many people are.

At one time I believed that those who were in cults such as Jehovah’s Witnesses, Mormons, the Moonies, etc., were all innocent victims who were deceived and tricked into becoming members of these false religions.  I don’t necessarily believe this any more.

Certainly there are those innocents who are involved in cults because they were born and raised in them.  I’m speaking of the children that are born into families of generational cult members.  These children did not choose their religion—their religion chose them.

I have been involved in studying and exposing cults for over three decades; my main focus has been on Jehovah’s Witnesses.  My sister has been in this false religion for over thirty years; her involvement was, and continues to be, one of the impetus’ for my continuing involvement and interest.

As I age and gain more experience in dealing with life and people, I’m learning some fascinating things.   One of the more interesting revelations is the disturbing reality that many people involved in cults remain in them because they choose to.  Though they know their religion has many problems—like the issue of the myriad of false prophecies their leaders have made—they choose to stay involved.

This is an area I have only recently become cognizant of.    As I wrote above, I have always been under the impression that people who stay in cults for decades—even their entire lifetimes—do so only because they have been unwittingly deceived and/or brainwashed.

On the contrary, many people in cults remain in them even though they realize the serious problems their group has.  Instead of doing the right and noble thing (leaving), they stay, willfully choosing to turn a blind eye to the problems they clearly see.

This willful blindness is magnified because of the rise of the internet; now, all the knowledge that a person needs to obtain to make a reasoned and rational decision about their group is only a few mouse clicks away, leaving people without an excuse.  They stay in the cult because they choose to.

This was further confirmed to me about two weeks ago when I had an unusual opportunity to interview an elderly JW man at the summer convention here in Tucson, AZ.  This was a remarkable conversation with this man due to the fact that such dialogues rarely, if ever, happen in these circumstances.

At the summer JW conventions, your normal conversations with the rank and file members does not happen.  And if you do manage to strike up a conversation with someone, it is quickly ended by a JW elder or usher putting their arm around the individual speaking with you, gently whispering something in their ear, and leading them away.

This is why my approximate 20 minute conversation with this elderly man was so unusual.  I was holding the sign below when I approached him while he was sitting with a younger woman whom I supposed to be his daughter: 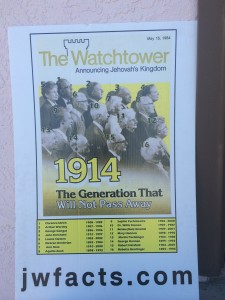 I asked him if I could get his opinion on what he thought about the teaching concerning the 1914 generation and how, 100 years later, this prediction has proven to be another false prophecy of the Watchtower Bible and Tract Society.

Our conversation was revealing in several points (I have the entire interaction recorded on video and hope to have it uploaded to Youtube shortly.)  He admitted that, like myself, he had questions about this teaching, but after doing additional research, he found answers that satisfied him.

One thing he was adamant about:  the Watchtower never claimed to be a “prophet,” an interesting twist that, if found to be true, would absolve the WT of the damming charge of being a “false prophet.”

He justified this false prophecy with your typical JW answer:

“I think it was about ten or fifteen years ago…we had a magazine that described what was understood to mean by “generation.”  So what we had to do too, is to adjust our thinking to “increasing light” as to what that means—the term “generation”—and it doesn’t necessarily mean a 20 year period…it doesn’t mean that…

“The thing is we have to put all the pieces of the puzzle in together as time goes on and expand our understanding of things so that we get the proper understanding.  We don’t want to just take off one idea and then conclude everything else is false and not look at new information.”

Fiat Lux: "Let there be light."